Looking to sell or purchase a Wesley Willis drawing?   Please contact us!  info@anatomicallycorrect.org

We have several original drawings available for purchase. 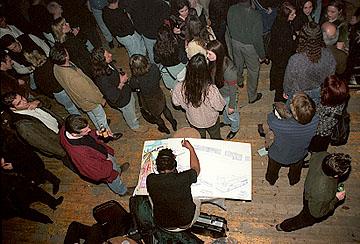 Wesley Willis at the Club Double Door in Chicago

A true Street Artist, Wesley Willis began his art career on the streets of  Chicago.    My first encounter with the African American, six-foot-five, 300 pound, schizophrenic artist was in 1991 where I met him in the back of a retail art supply store in Chicago.  Later I would see him with a large black portfolio or plastic trash bag walking the parking lot of a nearby grocery store offering his artwork.   Some of it was torn and stained, and it was clear that he needed money badly.   Instead of simply begging for money, he would give away one of his drawings if you gave him some spare change.  Back then, savvy buyers could purchase a Wesley Willis drawing for a few dollars.   After his rocketing career in Chicago's club circuit took off, he formed a band with guitarist Dale Meiners and became known as Wesley Willis and the Fiasco's (later changed to Fiasco).   His artwork steadily began to draw attention, even commercial galleries began selling it for a large profit.    Sadly, Wesley passed away in 2003.   His funeral was standing room only.  -- ©  Anatomically Correct 2017