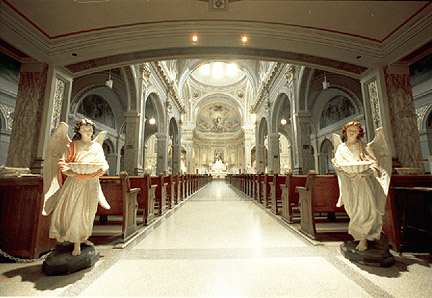 There is no charge for viewing of the artwork. Regular viewing hours are one hour prior to theatre performances.

This art exhibition is in complement to Northlight’s production of God's Man in Texas by David Rambo.

MARK DOBRZYCKI was born in Chicago and is a graduate of Northwestern University in Evanston, has completed his masters at Loyola University Chicago and has completed course work at Jagiellonian University, Krakow, Poland and at the John Paul II Foundation in Rome. Mark has interned and worked for the Associated Press as an editor, and reported for the Chicago Sun-Times.

Mark's photograph of Mother Teresa has been chosen to become part of the permanent George Eastman House Kodak Collection in Rochester, New York and was shown at the Imagesmith Show there. More of Mark's photographs are on display on the Illinois Humanities Council website at: www.prairie.org/kiosk/page1.html

[PHOTO COMING SOON] SUSAN MCMILLEN was born in Ashland, Kentucky and raised in Ft. Wayne, Indiana where she lived until 1990, when she moved to Chicago. She obtained her degree in General Studies from Indiana University, attended the School of the Art Institute of Chicago and is currently studying photography at Columbia College. In visiting China, Africa, Central and South America, India and the Mid East over the past six years, she has developed an immense appreciation of art from remote and third world countries as well as western art.

Street photography and her commitment to social change have become her lifelong passions. Susan has served on various boards and committees for such organizations as the Community Harvest Food Bank, the Alliance Board for the McMillen Center for Health Education, YMCA Camp and the Ft. Wayne Women’s Bureau. Her photos have been shown by through Anatomically Correct at the Bailiwick Arts Center, in addition to Gallery 1633 and the Three Arts Club. She looks forward to her next "sojourn".

[PHOTO COMING SOON]   JIM NEWBERRY was born in Evanston, Illinois and received his B.F.A in photography from Columbia College. He has worked and lived in Chicago as a freelance photographer for over ten years.

Jim is also a regular contributing photographer to the Chicago Reader. His photos were recently exhibit through Anatomically Correct at Bailiwick Arts Center.

DAN THOMSEN is a self-taught artist & poet who lives in the Wicker Park neighborhood of Chicago. He works at Bailiwick Repertory in the area of Group and Subscriber Services; and works with the Chicago-based band Hi-Fi and the Roadburners.

RAY VLCEK believes that through painting, he is able to explore his sub-conscious self, discovering parts of himself that his conscious will not allow him to express. Ray received his B.F.A. in drawing from Northern Illinois University and has exhibited in many galleries throughout Chicago, in addition to three exhibitions in Germany.

Ray has worked steadily as a scenic carpenter at Steppenwolf Theatre for the past two years. Ray is also the Technical Director at Chicago’s About Face Theatre, and continues to work with many other theatre companies on a freelance basis.

Anatomically Correct is an Illinois non-profit corporation dedicated to showcasing work by artists in public spaces in a combined effort to educate, diversify, and promote community awareness of the visual and performing arts. Artwork is available for purchase by contacting: