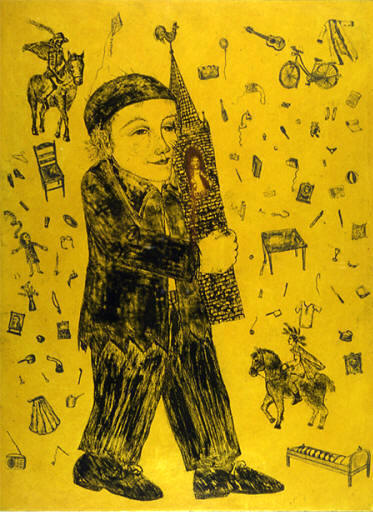 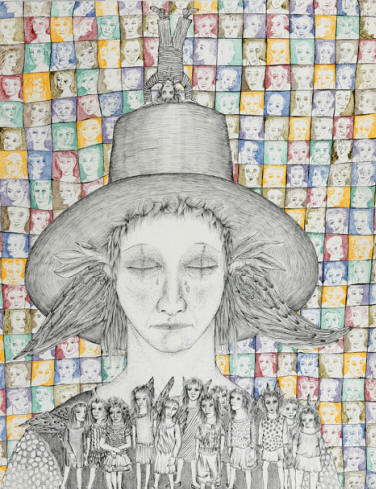 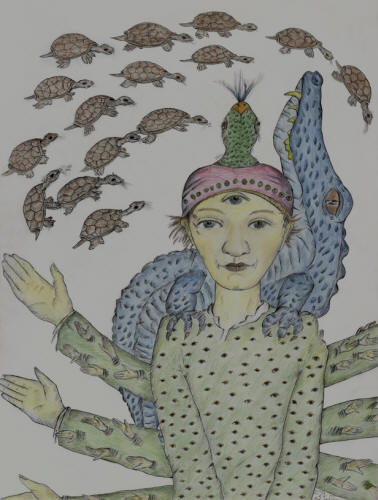 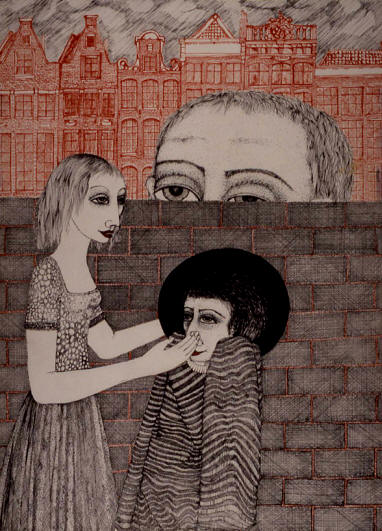 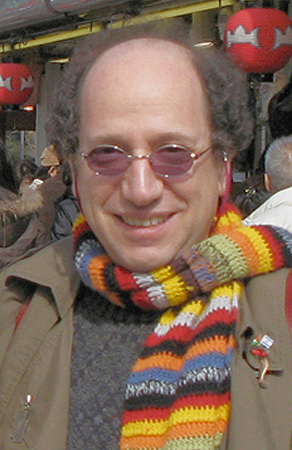 BERT MENCO (Oil Paintings and Etchings) "My Dutch-Jewish background has inspired much of my art. History has had an unavoidable personal impact on me. The traumatic events of World War II affected every post-war Jewish child, often by things unspoken. I am no exception. I am sure that in many ways my parents’ history has affected my art as it is impossible to separate myself from these events that have had a major impact on the course of my life. I was born just after the war that divided the century in half. My mother and her family survived the bombing of Rotterdam, though only she and my grandmother survived the Holocaust. My father’s immediate family was completely annihilated, but my father survived the war, rescued by French communists. My parents met while they were refugees in Switzerland; they married on May Day, 1945. While out of the country to save their lives, my family, like many others, was robbed on all sides. When he returned to the Netherlands, my father received ten guilders from the Dutch government; one golden coin to re-start his life. I have been drawing since I was a toddler and have never stopped. Much of my early interest in art came from my mother’s murdered father. He owned an important musical instrument store, arranged concerts in Holland for such luminaries as Louis Armstrong, even flew in airplanes in the thirties. He had attended art school and was very accomplished with watercolors and pastels, producing a beautiful sketchbook after he was forced out of the store by the Nazis. Another important factor in kindling my art was our neighbor, a retired school teacher and surrogate grandfather, Mr. van der Giesen. He often shared his incredible collection of art books with my brother and me. My mother took us to museums. The earliest exhibition I remember was on Jan Toorop’s daughter, Charley, still one of my favorite artists. My first art instructor was Dutch printmaker Maaike Alma. Torn between the arts & sciences, in 1972, I left for Conventry, England to pursue an advanced science degree. I did, however, continue to study printmaking at the Academy Artibus. In 1982, I came to the United States to work in the Department of Neurobiology and Physiology at Northwestern University as a Research Associate Professor. I chose a career in science, but have managed to be very active in the arts.   (Adapted from "A Selfportrait Inside Out"  Contemporary Impressions, Vol. 6,  #2, pp.6-9 (1998)  © American Print Alliance)

Bert has studied art at the Evanston Art Center, Wekwinkel, Wageningen in the Netherlands, at Lanchester Polytechnic in Coventry, U.K., the North Shore Art League in Winnetka, IL and the Noyes Cultural Center in Evanston, IL. In England, his work has been exhibited at the Cultural Center in Leamington Spa and at the Warwick Gallery.    He has also exhibited his work at the Evanston Art Center, the Suburban Fine Art Center in Highland Park, the Hokkaido Museum, the Dittmar Gallery at Northwestern University and the Columbia Center for Book & Paper Arts,   to mention only a few.

© 2017  No text or photograph contained in the pages of this website may be reproduced without the expressed written permission of the artist and/or Anatomically Correct.